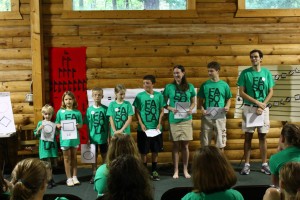 Young campers line up to form a major scale in a rudiments class at Youth Camp.

Make a tax-deductible donation to Camp Fasola (a project of SHMHA, a 501(c)3 non-profit organization) in memory of five-time camper Oliver Kindig-Stokes, who died in October 2015 at age twenty-two.

Donate to Camp Fasola in memory of camp co-founders, Jeff Sheppard and Shelbie Sheppard. Donating to the Camp Fasola youth scholarship fund is a way to thank Jeff and Shelbie and all of those who work so hard to make Camp the amazing program that it is.